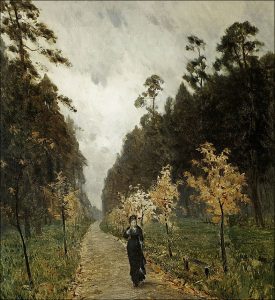 When I want to understand the nostalgia
I always feel for autumns blessed
with huge leaden clouds, muddy paths,
and gusts of great northerly rain,
I must forget that I have a body,
am born of parents or that I was ever more
than a child scattering fallen leaves,
I must remind myself that yellow and red
are the dress and blood of October,
that the houses men build decay, fall,
and become part of the gardens that surround them,
that the old woman, numb and blind to the world,
standing at the trolley stop was once young and in love,
that the beautiful girl who ran up from behind me
to ask a question in a language I didn’t understand
will one day take to her bed and die,
that long before I had a body, breathing decay,
I braved the river’s dark duration
and mounted the heavy air of twilight
on the flapping wings of a primeval crow.

After so many years of becoming different,
and lifetimes of remaining the same,
after waiting for the sun to grow distant
and the river to cut icy needles from its flow;
after witnessing red-leafed ivy climb
over rusted fences meant to keep men out,
and the apple tree, laden with yellow fruit,
waiting for the specter of the frost;
after watching so many evening come
burdened with the heaviness of smoke,
and nights fall with the finality of spilled ink,
after detecting how the odor of love
fills my room with its intimate perfume,
I still wonder what I can learn from the red berries
that are poisonous but so beautiful,
from the hands that hold back or from the feet
that are making their way toward me now.

When I want to translate the rain that follows me,
or the maze of ten-thousand black umbrellas
that have become our sky, or the days
confined to rooms scented with books and loneliness,
I hurry through streets freckled with yellow leaves
into pharmacies reeking of menthol
or into red-bricked institutions
stained with the odor of cabbage and vinegar;
and when I long to understand the nostalgia
of being in love, I search the parks for the woman
that will remind me of the one who slept in my arms
under the heavy blankets on my bed.

After so many hours of listening
for the approach of the wind and the rain,
after so much time spent rummaging through the remnants
of my melancholy October days,
I still believe in the ingenuous persistence
of my eyes to find the beauty in the ritual of the dead
or in the bells that proclaim the passing of fire and ash;
after so many attempts to understand
how my feelings will be translated
into the presence I have now become,
I lag behind the rest, unambitious,
with a terrible hunger for the details
that tell the stories of the ones I love.