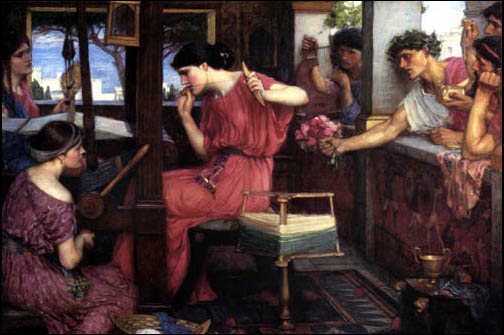 In 1922 T. S. Eliot published The Waste Land. Most references to that poem today, nearly one hundred years later, refer to it, not as one of the great poems of the twentieth century, but as one of the most ‘influential’ or ‘important’ poems of the twentieth century. Certainly one of the more radical aspects of The Waste Land is the way that Eliot referenced myth. Instead of choosing one mythology, he included references to many different mythologies within a single poem. Nobody had done that before, or had done it quite like Eliot had. Generally poets who make use of mythology chose one mythology, whether it be Greek (Classical), Arthurian, Christian, Celtic, or Native American. Poets like Tennyson had written some poems referencing Greek myths and some referencing Arthurian myths, but had not combined different mythologies in one poem. The way in which The Waste Land is a kind of mixed bag of myth was considered very modern when the poem appeared.

According to Eliot’s notes, in writing the Waste Land he was particularly indebted to two books, Jessie L. Weston’s From Ritual to Romance and Sir James Frazer’s The Golden Bough. Both are essentially books on comparative mythology. The idea that allowed Eliot to write The Waste Land the way he did was the notion that myths were not a picture of spiritual reality, but cultural stories or shared beliefs. This meant that different myths could be compared, and that, because certain, more objective elements of mythical stories could be isolated as typical, they expressed a more universal truth about man. This had, for the time, some scandalous implications. For instance, on its publication, The Golden Bowl scandalized British readers because it included the story of Jesus as part of its comparative study. It suggested that the story of Christ could be studied in the same way that the story of Heracles is studied. Christianity was not more real than Classical mythology; it was simply a different version of a universal journey.

The ideas expressed in The Golden Bough had a tremendous effect on the literature of the period, affecting poets like Robert Graves, William Carol Williams, D. H. Lawrence, and William Butler Yeats. And later books on comparative mythology, particularly Joseph Campbell’s The Hero with a Thousand Faces, affected new generations of poets, writers, and filmmakers.

Of course not all poets concern themselves with myth; many choose to forego myth altogether. In my mind the two poets who succeeded best at this were Walt Whitman, and his greatest literary heir, Pablo Neruda. But both these men managed to create personal myths around themselves. In a sense their lives as poets became the mythical story. You can see it in the way they remade themselves by playing different roles. In Whitman’s case you have the poet of democracy, the war poet, and the great, old, spiritual sage; in Neruda’s case, the diplomat poet, the poet of communism, and the disillusioned recluse.

One of the major attractions of forgoing references to mythology is what both Whitman and Neruda craved: an appeal to a large and primarily unscholarly audience. Mythology, unless it is ingrained in the culture, requires some study and research. This can be off-putting. In fact one of the most common complaints you hear about The Waste Land, even today, is its obscurity. Eliot’s notes about the poem are half as long as the poem itself.

Still, it has to be said that the large audience of common people that Whitman wanted as his reading public never really materialized, certainly not in his lifetime. And it doesn’t seem like the twenty-first century is bringing with it a surge of interest in serious poetry. It is probably more true to say that people who read poetry are not going to be put off by a little obscurity. And unless a poet can create a myth around his story, as Whitman and Neruda did, a poet who disregards myth will need to find something bigger than his own thoughts and feelings to transform his verse. In Whitman’s poems the poet’s tremendous empathy transforms his poetry. In Song of Myself, which begins, ‘I celebrate myself, and sing myself,’ you would be hard-pressed to find the details of Whitman’s life. It’s all about what he sees and the people he meets.

Poetry is more than voice and experience. A poet needs to find something universal in their experience and transform it for their readers. And myth has often played that role. Let’s look at a Wallace Stevens poem, The World as Mediation, that uses myth and see what he gains.

The poem is wonderful. It describes a woman who is waking up from a dream about her absent lover. The warmth of the sun shines on her pillow, and she, half-asleep, mistakes that warmth for her lover.

By making the woman Penelope, Stevens adds another world to the poem.

Is it Ulysses that approaches from the east,
The interminable adventurer? …

The poem gains enormously by its reference to the Odyssey. It gains from our excitement about Ulysses’ fantastic voyage, from our feelings about the incredible trials Penelope had to endure to keep her faith in her husband, and from our knowledge that ultimately the two lovers will be united. Myth allows Stevens to say an enormous amount in twenty-four lines. If he had left the woman unnamed, the poem would mean less to us. But then, for readers who haven’t read the Odyssey, the names Penelope and Ulysses are not going to evoke any special feelings. Stevens made the assumption that the people who would be reading his poem would also have read the Odyssey.

Poets don’t write in a vacuum; they gain from each other. I like to think of poetry as a discussion or storytelling through time. Stories that Homer told three thousand years ago may be elaborated or retold from a different point of view by Sophocles and Euripides four hundred years later, and then by Virgil after another four hundred years, and then referenced in our time by poets like Eliot, Stevens, Rilke, Louise Gluck, and Rita Dove. The same can be said about an idea. Keats can write a poem in 1820 (Ode on a Grecian Urn) which says (famously), ‘Beauty is truth, truth beauty,’ and Steven can write a poem (Anecdote of the Jar) a hundred years later that comments on the Keats poem. And if you don’t know the Keats poem you miss the fun.

Any discussion of poetry and myth would not be complete with a few sentences on Blake. Blake is a special case. In his prophetic books he created his own mythology based on biblical stories, English tradition, and his visions. In some respects he is the polar opposite of a poet like Whitman, who took the external around him and created a vision out of that. (This is demonstrated best in one of his great poems, The Sleepers.) Blake is all about inner vision or what he called imagination. His larger works require persistence and study. That said, his lyrics stand very well by themselves. Songs of Innocence and Experience contains some of the best short poems in the English language.

It is also must be noted that after writing The Waste Land Eliot joined the Anglican Church and primarily concerned himself with Christian myth (Ash Wednesday and The Rock). And in his last great work, The Four Quartets, he is more concerned with symbols—fire, the river, the lilac—than with myth.

In the end myth is just one of the many tools a poet can have in their box. There are many, many great poems that don’t employ myth. Poets write from experience, not from ideas or stories they get from other poets. That said, a poet who doesn’t read a great deal of poetry misses being part of the great discussion that began with poets like Homer, Lao Tzu, and the prophets who wrote the poetic books of the Old Testament.