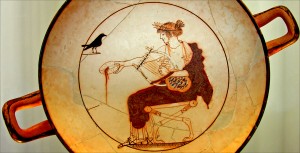 Don’t ask me to interpret the numbers you tally,
the handwriting of the woman who left you,
or the broken flight of the cranes by the sea;
don’t ask me to interpret the dream you had
of living underwater in a river
of swift dark currents and a bed of white stones:
with effort I am swimming upstream
heavy with the wet clothes of my flesh,
and the hands I use to reach toward you
I no longer know how to possess.

What does it mean—the abruptness of a wind
from nowhere that bangs the window shut
or blows the torn pages of a book toward you?
What does it mean—a summer lost to love,
the reminder of water dripping over stones,
the sorcery of time (that an entire season
can be lost to the inwardness of thoughts
and then, by the river, in an instant,
a firmament of stars can leap up
into the constellations of a millennium).
What does it mean that the last Sybil has sung,
that the messenger of the times comes,
not as a bearded god with a staff of flame,
or as an angel with a dangling sword,
but as an old woman wrapped in a dirty blanket
telling fortunes she can never understand?

What does it mean that beauty is indiscriminate,
that the ritual you evoke with purple cloth
and the smoke of bay leaves has been abandoned,
that one crossing the river is pulled
by the swift current into the dead silence,
while a second, no less unworthy, is spared,
and who are we to say that the one
is more fortunate than the other,
that death is more abrupt than birth;
who are we to say that the signs
that we have been so eager to interpret
can have any more meaning than to say
that they come from an irrepressible urge
of the ministering dead to cut through
the heavy air that surrounds our sleep?

Don’t ask me to tell you what the past
will bring to the future you fear,
what broods in the entrails of certain birds,
what rumors circulated among the dying,
or why the earth is a dirty sky
for an underworld populated with the shades
of terrified horses, savage dogs,
and warriors caught in a battle no one can win,
I have forsaken answers in favor
of a multitude of sins; three of which are:
letting the wind carry my thoughts away,
pouring black, heavy water from the river
into the cups of my friends, and feeling, in my bones,
a shameless sympathy for everyone I meet.