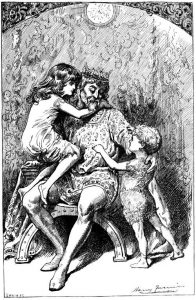 In his preface to Sylvie and Bruno Concluded Lewis Carroll writes: Human beings might sometimes become conscious of what goes on in the fairy-world—by actual transference of their material essence, such as we meet with in esoteric Buddhism. He explains:

I have supposed a human being to be capable of various physical states and varying degrees of consciousness.

He then describes three different states of consciousness, which he designates states A, B, and C. State ‘A’ is our ordinary state, where we have no consciousness of the presence of fairies. State ‘B’ is the ‘eerie’ state where we are conscious of our surroundings and are also conscious of the presence of fairies. State ‘C’ is where our immaterial essence migrates to fairyland—a land he refers to as the ‘actual world.’

Today the English Victorian fairy tale is primarily studied for its moral stories. All the evils of that age are well represented in fairy tales by the likes of John Ruskin, Charles Dickens, Mary de Morgan, Oscar Wilde, Ford Madox Ford, E. Nesbit, and many others. There is a wonderful collection published by Pantheon, The Victorian Fairy Book, which gives a good selection as well as a good overview of the fairy tale in Victorian England and its relation to the continental tale. Oddly Carroll is not represented or mentioned in the introduction. Yet his Alice stories continue to be the most popular children’s book written in his age, maybe one of the most popular children’s books of all time. Perhaps the editor didn’t feel the need to include a selection from such a popular story or didn’t want to break up Carroll’s books in order to fit a selection in the confines of his collection. In any case, Alice is not a moral tale. You would be hard-pressed to lift a nice moral suitable for children from Alice’s Adventures in Wonderland or Through the Looking Glass, yet they have intrigued generations of children (and adults) since their publication 150 years ago. If Wordsworth is right and our children bring with them intimations of immortality and that we all come:

Not in entire forgetfulness,
And not in utter nakedness,
But trailing clouds of glory…

then perhaps what Carroll offers a child is not a model of moral behavior, but rather a connection to their higher self, which is born intact and knows what we, as adults, have forgotten.

The symbols that Carroll employs to hint at esoteric ideas in Alice and Sylvie and Bruno are sophisticated, yet the stories work on a level of entertainment as well. This is an important point. Without some kind of double level esoteric works are much more likely to fall into oblivion. They don’t necessarily have to be entertaining, but they should have a double attraction; the most enduring esoteric works attract both people who are and are not interested in esotericism. The people who are not interested in the hidden meaning and admire the work because of its artistic achievement pass the work on to later generations who might or might not be able to decipher the text.

Of course, Carroll is not alone in writing esoteric fairy tales. Han Andersen’s tale The Old Oak Tree’s Last Dream, besides being a wonderful Christmas story, is a vision of the astral world and an elucidation on the unreality of our perception of time. Goethe’s Fairy Tale (Marchen) is steeped in Hermetic and Masonic symbols. Goethe said about the story: it is a fairy tale that will remind you of everything and nothing. He refused to interpret it, but that didn’t keep Jung and Rudolph Steiner from writing an analysis of it. Folk and Fairy tale collectors like the brother’s Grimm and Andrew Lang knowingly or unknowingly preserved many esoteric stories. Simple stories like Sleeping Beauty and Cinderella and Hansel and Gretel present characters that represent symbols to parts of the human psyche that need to be understood and mastered if inner work is to bring us to higher centers.

Eastern folk-story collections like The Thousand and One Nights and the tales of Nasrudin (collected and put into English by Idres Shah in the last century) are also sprinkled with esoteric knowledge if you know how to decode what you read.

Esoteric knowledge is not innate in the ordinary way we think about that word. It is not natural and is most often acquired through outside sources, like books or other people. At the same time seeing and understanding esoteric principles is based on a different perception. The knowledge remains hidden because most people are asleep to the perception. When higher centers work, esoteric knowledge is seen, or rather, rediscovered; it is then that it becomes possible to decipher and to pass on understanding

Louisa and the Key

When I set out to write Louisa and the Key, I knew that I wanted a strong narrative voice. I wanted the story to be told so that even on the page the reader would have the sense that they were being spoken to. This is an aspect that I have always liked in Hans Andersen’s fairy tales, many of which I first heard read aloud. It is not a style that is popular anymore, at least not in literary fiction. Almost all my creative writing teachers taught me that in story writing I must show and not tell. Writers, at least in my generation, were taught to be camera-like in their narration: follow the visuals, record the dialogue, but don’t comment or add an attitude.

For me, this style of writing seemed too cold for a fairy tale. A strong narrative voice can add something like a soul to a story. It is there, in the background, almost invisible, guiding you through the story. Of course, this is only a positive aspect if what is added is intelligent or humorous or compassionate. A negative attitude will only cast a negative shadow over the telling.

I will say at the outset that Louisa is a symbolic tale. There are symbols and hidden meanings on every page, but like Goethe, I have decided to decline to say what those symbols mean to me. I hope the tale is also funny and surprising, and that it stands on its own as an entertainment. It was a joy to write.