The Bow of Ulysses 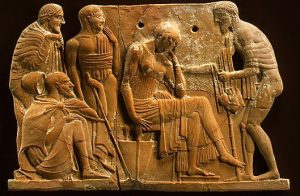 The Bow of Ulysses

Property is an idea. This was understood once.
A night of revolving planets and falling stars
was not so distant then. The world was without tenants,
no one claimed it, no one said ‘mine’ or ‘ours.’

The rain fell differently too, rising up
in the mist that was our breath it fed our sinews
and washed our skin; the rivers were also wider
and faster running, and the sky was a deeper blue.

April was not then named, but came
all the same, came resurrecting
savage memories of earlier springs,
of seasons not counted but remembered and seen.

Even the earth was then too abandoned
to belong; its storms, harsh winds, and earthquakes,
were respected and feared; its violent floods
left havoc and humility in their wake.

But then the bow of Ulysses needed
to signify the man, needed to be owned;
and the barbarous strength became the barbarous law,
and, for the first time, the warrior sat on his throne.

At once it was settled and having and not having
became the measure of a man’s earthly fame—
a bowl, a sword, a shield, a place by the fire.
The dogs soon understood and made their claims.

But now the invention has become fixed,
has ceased to be an idea, has become a tree
we forgot to admire because it wasn’t ours,
the chair we always sit in, a boundary,

a home, a wife, a son, a disposition to secure
a little square of the world that we can call property,
a way of looking at the sun, as if the slanted
morning light were meant for our garden only.

Traveler, you who have come so far
and have seen so much, you who must die,
what luggage do you carry?
On what estate does your spirit rely?