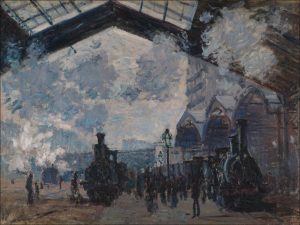 I stood before the train station today
and watched as a multitude of people fled
from themselves to the city’s splendor and decay;
I had not seen so many overcome with dread.

Some were lost inside themselves, hopeless and blind
they fixed their eyes on nothing, not even their feet;
picking their way through the mass of mankind,
they trudged and stumbled from the station to the street.

Some hurried over the warm, misted breath,
exhaled through the wrought iron drains,
to where taxis stood like angels of death
ready to disappear down fog-domed lanes.

Some looked and looked, paced up and down,
and then cast their eyes about in despair;
forgotten or abandoned, they vacantly frowned,
collapsed inside themselves and were nowhere.

Others, with battered and empty faces,
with a scarf or a raised collar against the cold,
prepared to walk to those fugitive places
where they hoped against hope to be consoled.

And when the city echoed with clang of bells,
I watched the evening sky turn from red to gray,
and thought that those station doors were the gates of hell,
and the scene I watched the mirror of judgment day.