Time: Act One, Scene One 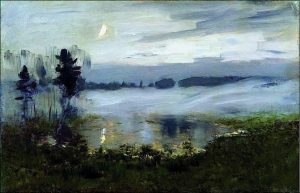 Time: Act One, Scene One

Along a narrow strip of wet road
the gods are trying to slow creation down,
but eternity, like a snake,
keeps snapping its head wildly around.

The sky is consumed in whirlpools,
and creation chokes back dark clouds.
Existence is compact and shadowless,
like an envelope or a burial shroud.

A few trees, ancient without being old,
solid without being real, stand mute
and stretch their black, broken branches
from embryonic trunks and knotted roots.

Cold is not even an idea,
and winter is not yet thought about,
but the slant of a distant sun
foreshadows darker moods and doubts.

Succession is still to come,
and change is not yet possible.
The gods want to partition a piece of the abyss:
they have conceived the growth of a soul.

Time is their device; it jumps and stops
like sheets of rain falling over a meadow
while half-formed creatures watch
like faces forever framed in a window.

A kind of night keeps breaking in—
but without the yellow crescent scar
of a moon it is lit only
by the most primeval stars.

The whole experiment keeps losing focus,
keeps falling off into mere space,
but finally, a figure comes up the reflecting path.
He has Eve’s guilt and Adam’s face

A determination has been realized
in the straining of his limbs.
His past is a blank slate.
All of history pushes back toward him.

And from the side, creation keeps breaking in,
keeps overwhelming now with eternity,
keeps hurling sparks of forever
that fall around him like colored confetti.

Time is bent. Its circular corridors
blind him to what’s around the bend.
Surrounded by his own reflection,
he knows nothing of what the gods intend.

Perhaps they are lonely or bored,
perhaps infinity is something they want to share.
With excitement they rush around him
like a wind from nowhere.