The Nature of Suffering 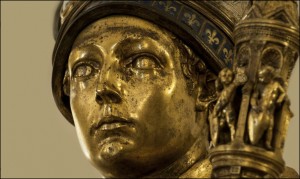 Suffering is a fact of human life. Some people suffer more than others, but no one completely avoids suffering. Though a good amount of the suffering we experience is unnecessary—the result of our identifications, our sleep, and our vices—much of the suffering that we find in everyday life is unavoidable. It can be said suffering is part of the human condition.  Christ suffered, as did Muhammad and Moses.

Esoterically we have to assume that if man must suffer, then suffering must be a necessary part of connecting to higher centers. We must assume that without suffering man could not reach the heights which are documented in the texts, in the art, and in the music of human spirituality.

Suffering changes us and there is a simple way to understand how this works. It is this: when we suffer we strengthen whatever we are feeling in our inner world.

Suffering is a fixative—like a mordant used to fix dye. It tends to fix whatever part of man’s nature is uppermost while the suffering is being endured. ~ Rodney Collin

I saw this happen to a man who was a patient at the psychiatric clinic where I worked. He was in his middle twenties, a little overweight, balding, but still a pleasant-looking fellow. On his first admission, he complained about bouts of depression, but they seemed to come and go. Truthfully, I didn’t really see what the problem was. He was funny, though much of his humor was ironic and directed at himself, and he expressed himself well. And though he had some issues with confidence, particularly in relation to women, I didn’t think his problems were to the point of meriting hospitalization. What I did notice about him was that, when confronted with any difficulty, he tended to mope and to feel sorry for himself.

On his first admission he stayed only two weeks. The doctor gave him medication, and we tried to make him feel better about himself, and then we sent him home. But some months later, he admitted himself for a second time. And he was worse. The frequency of his bouts of depression had increased, his social skills had deteriorated, and his humor had become darker. The doctor put him on a different medication, but still there was no talk of him being suicidal, so again he was released, this time after about a month. But a few months later he was admitted for the third time and was worse again, but again he was released. And then, only eighteen months after his first admission, he tried to commit suicide and was admitted for the fourth time.

On his fourth admission he was committed and stayed at the clinic for nearly three months. Eventually what I understood about him was that self-pity was his mechanism for dealing with suffering—it was his chief feature. Whenever something happened on the ward that made him uncomfortable, he responded with self-pity. And I think it was this tendency that was responsible for his downward spiral.

A woman I knew wasn’t particularly overweight, but she wasn’t thin either. She spent a lot of time thinking about what other people thought of her. She very much wanted people to like her, and she thought they would like her better if she was thinner. So her need to be liked became a primary motivation for her to diet. She would sometimes not eat for days. This fasting, even though it wasn’t terrible suffering, was certainly difficult for her. And when she experienced the discomfort of wanting to eat, she naturally remembered why she was dieting: because she wanted people to like her. So her dieting reinforced her need to be liked, which reinforced her dependence on other people for her self-worth. The whole process became a kind of vicious circle: her self-image problems led to more dieting, which led to a bigger self-image problem, which led to more extreme dieting, which eventually landed her in a hospital.

Of course this works the other way around as well. Suffering, instead of making you weaker and more depressed, has the potential to make you stronger and more content. If you can remain positive and accept your suffering, then your suffering will make you a more positive and accepting person. In a very real way you can become the person you want to be by using your difficulties to strengthen the parts of yourself you want to encourage.

If a man refuses to suffer except when he is making efforts for a definite aim and knows what he wants, then he tends to fix aim and determination. ~ Rodney Collin

From one point of view we can say that Gurdjieff’s account of his own suffering in the prologue to Life Is Real Only Then, When “I Am” is a moving chronicle of what a man must suffer in order to permanently fix self-remembering. Among other difficulties, he describes how he was shot three times.

It would be enough to recall that strange and inexplicable destiny pursuing me, which consisted of having been wounded three times in quite different circumstances, each time almost mortally and each time by a stray bullet. ~ G. I. Gurdjieff

This explains why a monk or a hermit would go out to the desert and seek out the difficulties of solitude and the rigors of an ascetic life: he understands that he can only fix his beliefs and his religious feeling by testing them against suffering. Instead of waiting for difficulties to find him, he voluntarily imposes a set of rigors on himself. In this way he begins to separate his will from the body which is what suffers. The greater his will, the greater his need to transform more and more difficulties. His aim in the end is to create a soul that has a completely independent existence from the body. He draws his consciousness apart from physical life; he strengthens the soul to such a point of separateness that it will be untouched by the death of the body.

Those men who reached such extraordinary heights of understanding in their different fields, must all have been visited sooner or later by the question: ‘How to make permanent such understanding in the face of illness, old age and approaching dissolution?’ The artists intuitively and the teachers consciously seem to have come to the same realization—that deliberately chosen suffering may provide exactly such a fixative, that mordant by which the lessons learned in life may be indelibly fixed into the material of man’s being. ~ Rodney Collin

Not long ago I noticed Marcus Aurelius was being talked about on the web because of a new biography. Some reviewers were even calling into question the value and usefulness of his philosophy in the twenty-first century. For me the Meditations are the intimate thoughts of a man who suffered greatly, both from sickness and from the nature of his role as the leader of a great army, and who attempted, not only to understand his suffering, but also to use it to change himself.

I was schooled to meet spasms of acute pain, the loss of my son, and the tedium of chronic illness with the same unaltered composure. ~ Marcus Aurelius

That was what he wanted: composure and contentment. Not an easy accomplishment.

At the same time it must be said that the process of separating the soul from the body through voluntary suffering has its dangers. First of all it must be understood that it is not the suffering itself that transfigures a man; it is the transformation of suffering. The suffering itself is like raw material; if it is not transformed into presence and higher emotion, then it serves no purpose. Luckily the where and when is easy to understand. If you can remain present and positive, if you can remember yourself, if you can connect to higher centers then it becomes possible for you to strengthen your will by voluntarily creating difficulties. But even if this is true for you, you can only benefit from this kind of effort for a very definite period of time. Of course the danger is that you will strengthen what is wrong in you, for instance, some kind of negativity or morbid sense. Suffering has no intrinsic value; it is like a heat, it fuses things. So the question becomes: is your being ready to be fused, to be made permanent? Is it free from all old traumas, negativity, and weakness? If it is not, then it is better to wait and to use other methods.

In my experience it is rare that people need to create additional difficulties for themselves. In everybody I know life creates enough suffering for the purposes of transformation. The point is that we need to transform the suffering that comes to us. What I see is that on a moment to moment basis we miss transforming many small irritations and difficulties because we don’t consider them important, or because we think we can change them, or because we have an attitude that the world should somehow be different.

Take a situation as small as being stuck in traffic when you need or want to be somewhere else. Even this can be transformed, but we tend to think wrongly about it. In the first place a man who is in pursuit of his own conscious evolution should never want to be somewhere else. So this is the first wrong idea we have to fight. We have to want to be where we are. Then there are excuses about why we shouldn’t have to be stuck in traffic. Maybe you believe that the government should be building more roads, or that it’s unfair that you, of all people, should have to suffer this. Maybe you even blast your horn or beat on the steering wheel, which of course does nothing to alter the situation. But you can see that, even in this little example, there is an enormous amount of energy to be had for self-remembering. The question is: can you get a handle on it, think rightly about, and transform it by being in the moment and remaining positive?

At the same time we need to remember that many of our difficulties are caused by our own foolishness. So we should be clear about that first: suffering that is under our control and can be eliminated should be. But, that said, suffering does seem to be an inevitable part of life. The point is to understand its power and not be swept away by it.

The hardest part is taking the first step. When we suffer we usually experience a myriad of emotions and thoughts, ranging from anger and frustration to acceptance. The question is: can we choose? When we suffer can we remember to ask ourselves: what kind of person do I want to become? What do I want to strengthen today?