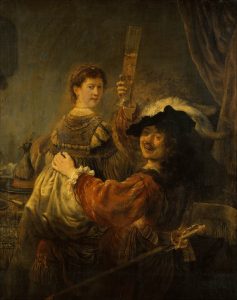 First, though not foremost, they didn’t understand
my passion for the antique: the blue china cup
with hairline cracks like veins, or the bust
of an unknown woman scarred by neglect
and seawater, were to them only broken or useless.
They thought the archaic temple and pyramid,
with their windows to the night sky,
were nothing more than prefigured attempts
at skyscraper and planetarium.
They were not persuaded by arguments
about the enchantment of ruined ramparts
viewed under the auspicious light of a full moon,
or by the evidence of beautiful rituals
they knew to be nothing more than the primitive
superstitions of an unscientific people.
They lived in the best of times and envisioned
man’s slow march toward the comforts suburban life,
astronauts, radiation therapy, and the luxury
of the automobile at sixty miles an hour.

How could they be expected to understand
the thrill of walking out from rented rooms
in a city famous for its medieval towers,
or the joy of standing in the corridor
of an overheated train compartment
and watching the stars appear, one by one,
in a bitterly cold, moonless sky,
or understand the satisfaction of sitting alone
at a concert for violin and recognizing
that there is no morality, only men and women
who endure because there is no other choice?
How could they be expected to understand
my passion for green seas, for overcrowded ships,
for islands abandoned by gods, and for straits
so treacherous that no captain
has navigated them without shipwreck?
Would they believe me, even now, if I described
the vastness of my present sympathies,
how cities of down-trodden souls move me,
and how I am careful not to disturb their sleep?

To them I was like the wild apple tree
that stood at the border of their property;
with suspicion they picked half its fruit.
The story you have heard from their point of view
was made into a cautionary tale for effect.
The rigors of my poverty were exaggerated
to keep others from straying from the fold.
But really how could I have explained
that my decadence was carefully
managed like an opium habit,
or that the pain I caused myself came to fire,
or that my exile was not a mistake,
but a flight from the stability of red-bricked houses
and ugly, uninspiring churches administered
by visionless priests who ate like shopkeepers?

I have my fears; I fear that I sleep too much
and that I wander from city to city
lost in a maze of other people’s dreams.
I fear that others, who are not like me,
will inhabit the rooms I rented
and feel dispirited by the elegant
but uncomfortable chairs that were too heavy
for me to take away, by the books
I abandoned, or by the sad engraving
I left behind of a woman I could have loved.
I fear and hope that another will trace my steps
down a path cut in a field and over a bridge
named for a philosopher king and know,
like me, grief and love and the passing of time.
But more than these I dread my return to that house
where memories I can longer claim
rise from the autumn scent of fallen rain,
or from yellowed photographs haunting trunks
in musty, overcrowded attics.
But I will return, as the story suggests;
and there at a meal in the evening
surrounded by brothers and sisters,
when the vague decay of November leaves
mingles with the smell of roasting meats,
I will awaken to the sound of bells echoing
over the rooftops of so many comfortable houses
and know loneliness for the first time.